Eleven years ago today, we landed in the UK on a two year working holiday visa. Our plan was to galavant about London, the UK and Europe for two years before heading to South America for more adventures. On our way to the UK we spent a week in Japan, where we snowboarded at Zao Onsen, Yamagata; celebrated Sakura (Japanese Cherry Blossom Festival) on the Izu Peninsula; and explored the bright lights of Tokyo. Throughout these adventures Rob dragged our snowboard bag with two snowboards and associated paraphernalia on Shinkensen, along country lanes (trying to find somewhere to sleep) and on the Tokyo Metro during rush hour – definitely not something we would recommend. All this hard work gained him the nickname (one of many) ‘YAK’.

What a difference eleven years makes. We find ourselves living in France about to start a European coastal adventure, with South America still very much part of our future plans. As our snowboarding Porte du Soliel adventures draw to a close, we find ourselves in what I have termed ‘transitional training’. Moving from only snowboarding to incorporating snowboarding with an increasing amount of walking/hiking. On Tuesday we headed to one of the smaller resorts in the Porte du Soliel, Saint-Jean-d’Aulps part of Espace Roc d’Enfer. We were actually meant to be there two weeks earlier, but our Jumpy broke down and hasn’t started since. Why we decided to go to Saint-Jean-d’Alps on Tuesday the 1st of April is not an April Fools Joke and will be explained in a much longer post very soon, however our day was filled with many, many laughs and practical jokes from the forces of the universe.

Since our Jumpy still wasn’t going the only way to get to St-Jean was to get the bus from Morzine to the Office du Tourisme (OT) in St-Jean before getting the local bus up to the ski station and telepheric. An early start to get the 8.39am bus was softened by the spinach quiche and pain chocolate for breakfast from our favourite bonbonnière. We were the only two people on the bus at this time of the morning and wondered how often the bus driver drove the route with no passengers at all. When we hoped off at the OT in St-Jean and started looking at the local bus timetable, we were surprised to see the bus driver standing beside us. Closer inspection (by all three of us) of the timetable showed that the local bus up to the ski station only ran until Sunday the 30th of March and in fact the bus that would normally have taken us there was parked right in front of us next to the OT. “It’s finished” said the bus driver “you get back on the bus and go to Morzine” sounding defeated for us. Rob and I looked at each other, ‘no, ca va bien, merci’. After a quick chat with the lady in the OT, she assured us that we could walk there in 25 mins and so off we headed. We arrived 45 minutes later.

A view on our walk up to St-Jean ski station, but where is the snow?

We spent the morning zooming (but not very fast, because while the piste freshly pisted and empty they were a bit icy) around the St-Jean Sector of Espace Roc d’Enfer before deciding to head over to Sector La Chèvrerie. At the top of the lift which drops you over the backside of the resort into La Chèvrerie it became apparent that all the piste, chairs and teleski (draglifts) in La Chèvrerie were finir, finished, ferme, closed. They had been running on the weekend, but had stopped on Sunday the 30th of March. And for reasons that I cannot explain at the moment, that is how we found ourselves walking up a number of pistes from Bellevaux La Chèvrerie to Col des Follys.

It was a beautiful day for a walk, warm and sunny and we were completely alone, which even with all our off-piste adventures hasn’t happened too often. As I was walking through the forest up Les Favières piste carrying the backpack with all our water, sandwiches, sunglasses, beanies, sunscreen, head torch, spare base layers, Robs snowboarding jacket, helmet, my snowboard and various other bits, just how much had changed in eleven years. It would appear that I am now the YAK!

During this time of transitional training we have enjoyed the walking as much the snowboarding and can now see the attraction of ski/board touring. With our bodies continually reminding us that we are not getting any younger and that we are probably not young enough to be throwing ourselves around the park, touring looks like where our future adventures will be focused. If we were to look into a crystal ball, I think it would show two split boards somewhere in the future.

At the top of Col del Follys we were rewarded with one of our best lunch spots this season. Not only did we have fantastic views down into both St-Jean and La Chèvrerie valleys, there was also a picnic table. As we sat down and appreciated our amazing lunch spot along with the peace and tranquility, we agreed that this was our reward for having walked up the hill. Before starting lunch I decided to duck behind a nearby tree to do a wee. As I was squatting I noticed a wine bottle lying on the grass nearby in the shade. “Imagine if there was some wine still inside”, I said to Rob as I walked over to pick up the bottle. You cannot even imagine my surprise when I picked up the wine bottle, not only to find that there was some inside, it was in fact unopened and perfectly cooled from having been in the shade.

One of our best lunch spots all season, Col De Follys

“And I have a wine bottle opener in my backpack!” Many of you will not be surprised by the fact that we carry a wine bottle opener, as we have often been known to carry a bottle of wine (or two) while walking. However, after a good rummage through all the additional bits that I the YAK was carrying there was no bottle opener. Our surprise, disbelief and excitement was replaced by laughter at the irony of having found a bottle of wine which we now could not drink. I was about half way through my sandwich when I spied a stick near by, and et voile ….. 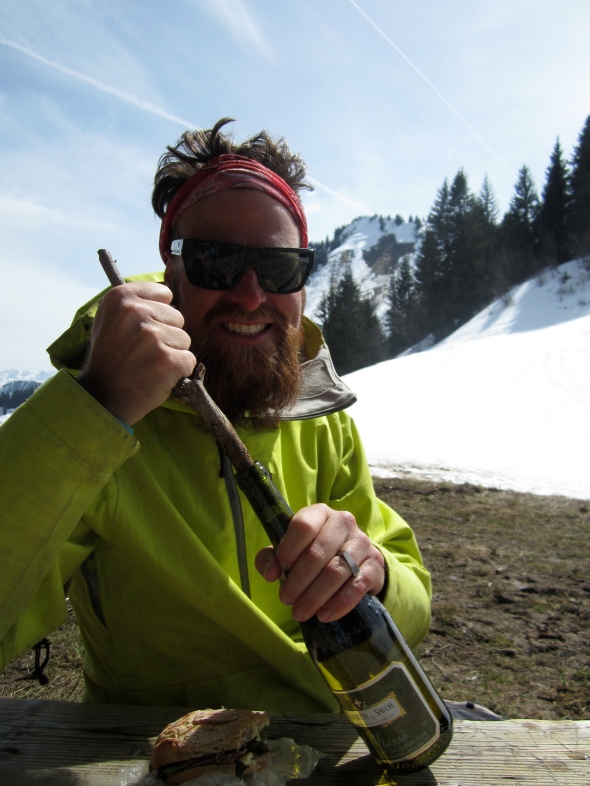 The mountain Gods plus Rob plus stick equals wine with lunch. What this photo unfortunately fails to capture is that Robs face is covered in wine

And so it was that one of our best lunches all season just became a little bit better. As we enjoyed our sandwiches and wine we reflected upon the past eleven years of adventures together. How many times the universe, mother nature and the mountain Gods had been good to us. With laughter of happiness and giggles of disbelief throughout. I do not think we could have planned a better Eleventh Robboy and Jules Adventures Anniversary.

The days adventures did not end there either. After lunch we got to enjoy the 5km Les Piste Follys back down into St-Jean. It was one of the best runs all season. I can only describe it as pisted off-piste, through a steep winding valley where you cannot see a chair lift and on this day not another human being. Peaceful, fun and fast! 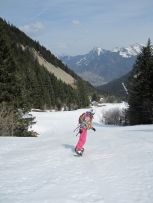 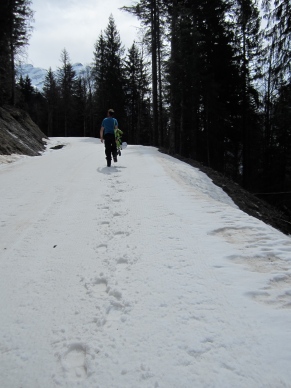 Footnote: You could say that the universe had the last laugh of this April Fools adventure. Just as I was finishing the post after more than two and a half hours and for reasons that I still do not understand, I lost over half of what I had written. If this day had not been one of the best all season and a story too good not to share, you probably would not have these words. Be good to the universe and the universe will be good to you, but when ‘it’ decides not when ‘you’ want it too.

01 Apr This entry was published on April 1, 2014 at 12:22 pm and is filed under Uncategorized. Bookmark the permalink. Follow any comments here with the RSS feed for this post.