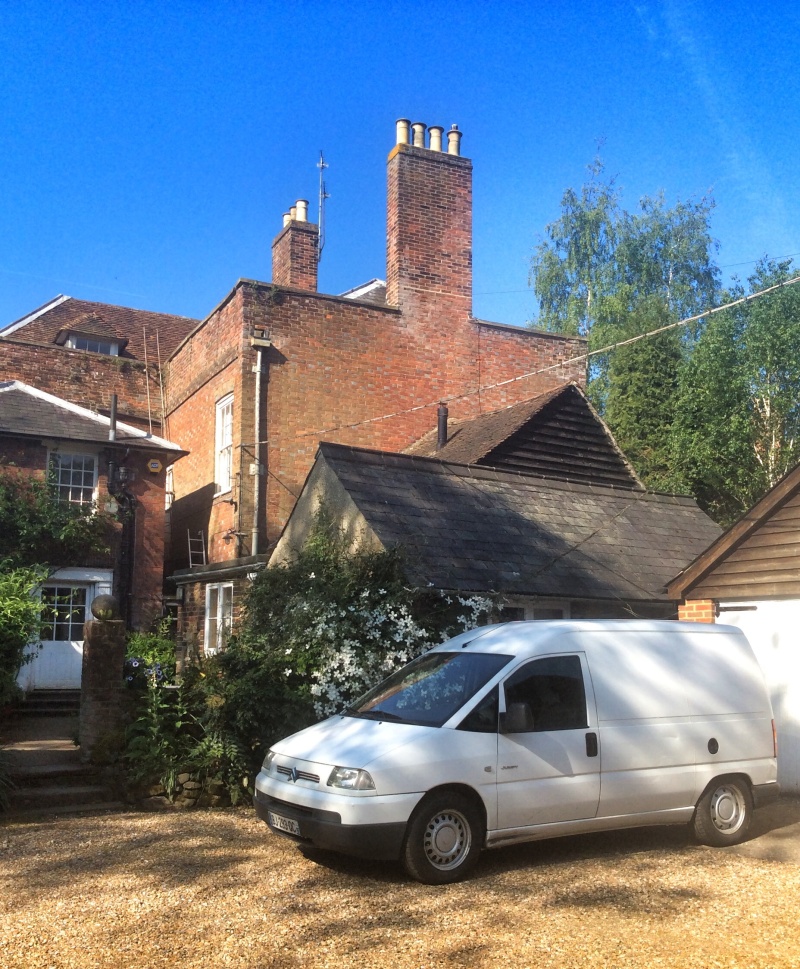 An injection into new adventures

We are late. Rob isn’t very comfortable being late. He likes to be punctual. Very punctual. And when you put together a plan and something goes slightly wrong, you can normally change a few of the minor details and still achieve your goals. Not this time. Well, not without a lot of money. Jumpy had a small driving issue in the fact that when you rolled into a roundabout, put the foot on the clutch, very occasionally the whole engine would cut out. It did it three times. First time the van came to a complete stop, and after a short pause and turn of the ignition it started again, and carried on… Very strange. The second time the same thing. The third time, it didn’t start again. The local garage came and collected jumpy, said that it was the fuel pump that was shot (or something of the sort in French after he had climbed under the van and hit some things with a hammer), and took it away for repair. It was ready in a week, and we collected it, but when went to drive away from the garage, it wouldn’t start… Hmm, said the mechanic, I changed the pump, who knows what is wrong with it? Ahh, we thought that would be you that should know what was wrong… 2 hours later, mechanic calls and says, oh it was a fuse, Jumpy starts now. Relieved we picked up Jumpy and drove off down the road to the supermarket and got the weekly groceries. When we came out, Jumpy wouldn’t start again. We tried pushing it, and two lovely French lads came and gave us a hand, opened the bonnet, scratched their heads, then pushed even harder and got her started. We drove into Morzine and the main roundabout in town, then the engine cut out and it rolled to a stop blocking the Main Street. Great. We managed to get another team of pushers together and parked her in a local restaurant carpark. In the morning we rang the garage, who apologised and said they would come and collect it for free, in 3 days time… Our original plan had 2 weeks of snowboarding, then drive back to UK for a wedding, so that should be enough time to fix the issue, right?

Wrong. 2 weeks came and they still had no idea. We flew back to the UK for the wedding and back to Morzine to see if the garage had any success. No, maybe the end of next week. Then the following week. The end of season closing party came as we managed to squeeze the last out of the snow, and then a week of rain where Julie and Rob watched 3 seasons of Suits TV show (making up for 11 years of not having a TV), then finally they had a break through. Well, they managed to find some damaged wiring, replaced a fuel regulator, took it for a 60km test drive, and then blew out the new fuel regulator. So it must be the fuel injectors then? Let’s send them away to check, and then we should know next week. So Rob and Jules started hiking the local peaks and walking the off piste trails they had been snowboarding (we found an amazing trail through a desiduous forest that we want to come back and try with good snow). We had a 7 hour hike to the top of Pointe de Nantaux and back to Morzine (which resulted in some interesting vertigo on Rob’s behalf. It gets a little intense when you are on top of the world, with a very steep, slippery grassy slope on one side, and a rocky cliff on the other). Meanwhile the news came back from the diesel specialist that two of the injectors were done, and this is the likely cause of all our issues. So at some good expense these were replaced, another fuel regulator installed (and the garage even removed the cost of the new fuel pump that they had mistakenly thought was the original problem).

Springtime at Changabangs – kind of like a motorbike cafe for snowboarders 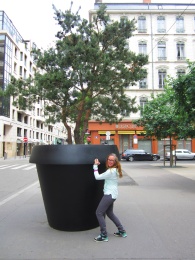 Julie and the Big Pot, Lyon

Rob (the Godfather) with his first meeting with little Zoe, West Malling.

And after all this Jumpy started. So we packed up our little apartment, collected Jumpy, did a lap around Morzine very nervously using the clutch to roll into roundabouts, and she continued to drive… Then we continued to Annecy to visit Yo, Estelle and the kids for the weekend and swapped some winter tires for summer ones. Then nervously drove to Lyon to visit more friends (and a fantastic surprise visit of one of our friends from Australia who happened to be passing through Lyon on her way to Canada… and you can visit Katie K’s blog here). Then we left Lyon and slightly more confidently drove to Reims, stayed the night in a little pod hotel, then woke and drove to Calais, then West Malling (see main photo of Jumpy relaxing in sunny Kent), and it looks like today, we may make it to Manchester… Perhaps Jumpy is fixed. But at least now it looks like we are back on our plan, even though we may be a month late.

Next up: Manchester, London, Stuttgart, Budapest, Belgrade then Istanbul. (well, that is the plan anyway).

15 May This entry was published on May 15, 2014 at 8:57 am and is filed under Uncategorized. Bookmark the permalink. Follow any comments here with the RSS feed for this post.

Older: We are really going to miss this view…
Newer: Farewell Captain Snowbeard, you will be missed.

7 thoughts on “An injection into new adventures”