And so with a bright orange engine warning light flashing in our face, and a diesel mechanic that has said good luck, we set sail on the Eurotunnel heading east. First stop (if Jumpy allows) is Stuttgart.

The past few days in London were productive and a little stressful.

Productive in the fact that Matty Z assisted us with tools and great advice to convert the back of Jumpy into a fully functioning camper van complete with storage containers, sleeping area, and full kitchen including gas stove, fridge, spice box, Frank and our new travelling herb garden (I am sure a name will follow shortly – any recommendations are welcome). 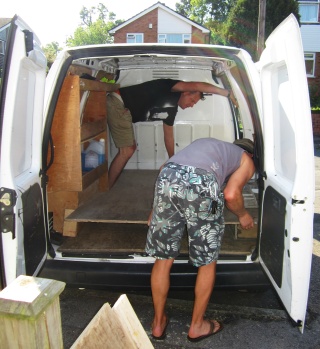 Matty Z and Robboy measuring out the back of jumpy

Julie with a saw. And she knows how to use it!

Stressful in the fact that after driving perfectly over 2000km back to the UK from France after Jumpy’s injector fiasco, the engine warning light came on again. We took it to the local mechanic to get diagnosed, and he said the alarm was for the fuel regulator. The same fuel regulator that we had replaced in France. Twice… after the mechanic burnt out the new one he replaced.

The English mechanic said not to worry, if the van is running fine, just ignore it. But we are going to Istanbul, we say. Hmmm, well, you could see the diesel mechanic specialist. If he doesn’t know the issue then it isn’t worth knowing.

So we go and visit the diesel specialist. He looks at the engine, through a magnifying glass (I kid you not), and suggests changing the fuel filter (as it is the only part of the fuel line that hasn’t been touched), which he does. And what does he find? Diesel fungus… Apparently this fungus can grow when water enters the fuel system… It is yellow and there was quite a bit. He took great pleasure in keeping a sample in a black spray can lid which looked like little pieces of lemon peel. So this could be the problem? Maybe. But the engine light is still on. The diesel specialist suggests a full clean of the fuel system, but as we are booked for the Eurotunnel the next day, he wishes us good luck, and if the van is running ok, then just ignore the engine warning light.

5.13am and we set off from North London around the M25 towards Folkstone and the Eurotunnel. Very nervously. When we plug in our IPod to the stereo in the van it automatically starts playing the first song on the albums list. The Album: Abba’s Greatest Hits. The Song: Take A Chance On Me. Today when we started driving the song title got stuck on the front display of the stereo after we skipped to what we wanted to listen to. While we contemplated whether the engine really had a problem or not but drove on to the pounding beats of Daft Punk, the Light display beamed TAKE A CHANC. We took this as an omen that Jumpy was trying to speak to us…

Abba’s Greatest Hits – And possibly a subliminal message from Jumpy

So here we are sitting on the train underneath the Channel after successfully driving from London, where any gust of wind could have been the engine stalling or dropping power and the warning light burning a hole in our brain… But if we make it to Stuttgart, we will put some black electrical tape over the light and carry on. And at least we know we will be dealing with German mechanics.

I guess in the upcoming days we will have a pretty good idea if this is correct.

(And when we arrived in Germany the engine light had gone out. How good is that for German mechanics? Just being in the same country as them looks like it fixes your vehicle).

23 May This entry was published on May 23, 2014 at 10:30 pm. It’s filed under Travel and tagged Citroen, diesel mechanic, Dispatch, Eurotunnel, Jumpy. Bookmark the permalink. Follow any comments here with the RSS feed for this post.

Older: Farewell Captain Snowbeard, you will be missed.
Newer: Belgrade