Jumpy comes to Istanbul – Part One

After more than 3000km from London we finally arrive in Istanbul. If we were to use one word to describe the journey it would be agricultural. Large swathes of the land between London and Istanbul is flat plains and rolling hills of spring time crops, country feeding vegetable gardens, orchards with the odd vineyard along the way. We had always said that as long as Jumpy made it to Istanbul we could figure everything else out.

It was only as we had the first glimps of Istanbul that Jules realised that Rob didn’t know much about Istanbul. He had come because Jules really wanted to go to Istanbul. Jules had wanted to come to Istanbul for a long time, to see where two continents meet in one city. A city that has been central to great empires and thus with “Istanbul not Constantinople, been a long time gone, Constantinople …” in her head Julie drove into Istanbul.

During her research the only thing that Jules had read about driving in Istanbul was – don’t. And so with Jumpy driving like a dream, Rob map in hand we drove into Istanbul on Friday night. It quickly became apparent that our accepted driving conventions did not hold true here. We were in the far right hand lane of a three lane motorway towards the centre, when a car came flying across our lane and then stopped on the hard shoulder. Jules – ‘what are they doing?’ Rob – ‘dropping off their friends’, and so they were. Everyone got out of the car, gave each other hugs and then the car went flying down the motorway again, while the friends walked up the embankment of the motorway towards home.

Storm brewing over the New District across the Golden Horn.

On the map it had looked relatively simple to get to where we were staying. A couple of motorways into the New District and then a left, a right, another right and then a left. It was all going to plan until we exited the motorway and needed to cross the river, but as we came off it was unclear if we needed to go left or right, as the motorways spun off in all directions. Jules guessed right, we should have gone left. With a swift U-ee (U-turn) and a quick reassessment, we were more or less back on track, we just crossed the Golden Horn on another bridge. However, as we came to the left, right, right, left we realised that with the maze of little streets we didn’t know exactly where we were on the map. That is how we found ourselves driving the very narrow cobblestone streets of Karakoy on a Friday night.

Jules had been taught by her Mum, that when driving somewhere head in the general direction and then work out the specifics. With this in mind, Jules asked Rob for something that we could drive towards so that we could hopefully work out where we were on the map, Galata Tower he said. So narrow were the lane-ways that Rob thought we were driving down pedestrian streets, but with cars in front and behind Jules continued. We followed the signs until, BOOM! We were right in front of Galata Tower. As we drove around the back of the Tower there was a group of tourists standing the middle of the street taking photos, with two quick beeps of Jumpy’s horn they jumped aside a pressed themselves against the walls as we continued. We were now driving down a narrow cobblestone lane which had a very sharp 90 degree turn to the right. On the left hand side a small tourist shop had its wears out on the street and so Jules slowly turned the corner ensuring she did not hit the display, when there was a ‘bang’ and a metal on metal scrapping sound. Having been so focused on the shop display, Jules had failed to notice the scaffolding on the right side of the lane. This was not the time or place to stop and look at the damage. But this was how Jumpy got her ‘Istanbul Kiss’.

The street behind Galata Tower where the tourists were taking photos of the Tower and then 90 degree right hand turn at the bottom.

The scene of the ‘kiss’. 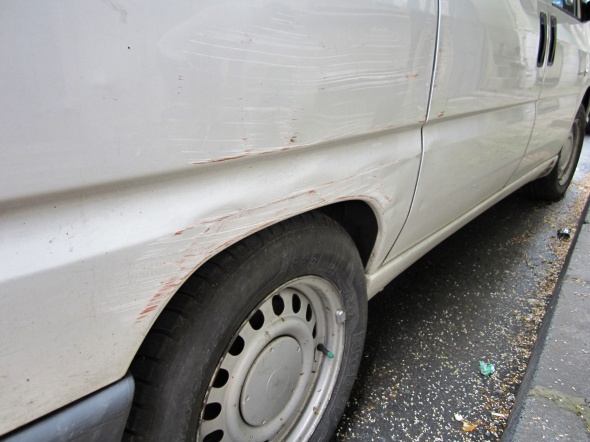 30 May This entry was published on May 30, 2014 at 9:12 am and is filed under Travel. Bookmark the permalink. Follow any comments here with the RSS feed for this post.

One thought on “We made it!”