Today we decided to take our little fold-up bikes across the Bosphorus on the ferry to the Asian side of Istanbul and explore Uskudar and Kadikoy.

We had read that Uskudar was much more conservative than the European side. It was a nice sunny, warm day, so Julie was trying to work out which of her dresses was the most conservative, but found that they either opted for too much leg or too much boobs. She went with the legs option.

When we arrived at Uskudar port, we realised what conservative meant as all the men were in long trousers and most of the women were covered up, especially their legs.

What we weren’t expecting was all the men to start taking out their phones and try to inconspicuously and not so inconspicuously take photos of Julie whilst she was out and about in downtown Uskudar cycling along the coastal boulevards.

I am sure that you will see many photos uploaded onto various Muslim or Turkish chat forums but probably most notably the photos for http://www.sexylegsandcycles.com 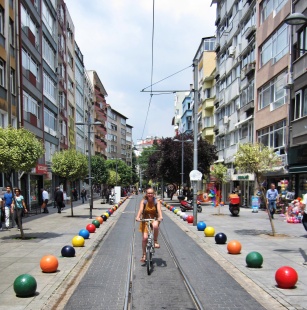 Kadikoy, the tram tracks and the bright coloured bollards. 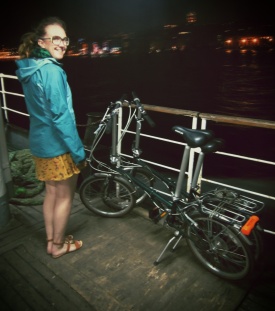 The boat back to the European side where short dresses are a little more accepted and twin Dahon Boardwalk fold-ups.

Next time it is suggested that we should dress conservatively, Julie is going to opt for some trousers…

03 Jun This entry was published on June 3, 2014 at 6:29 am. It’s filed under Travel and tagged bicycles, cycling, Dahon, Fold-up bike, Istanbul, Uskudar. Bookmark the permalink. Follow any comments here with the RSS feed for this post.