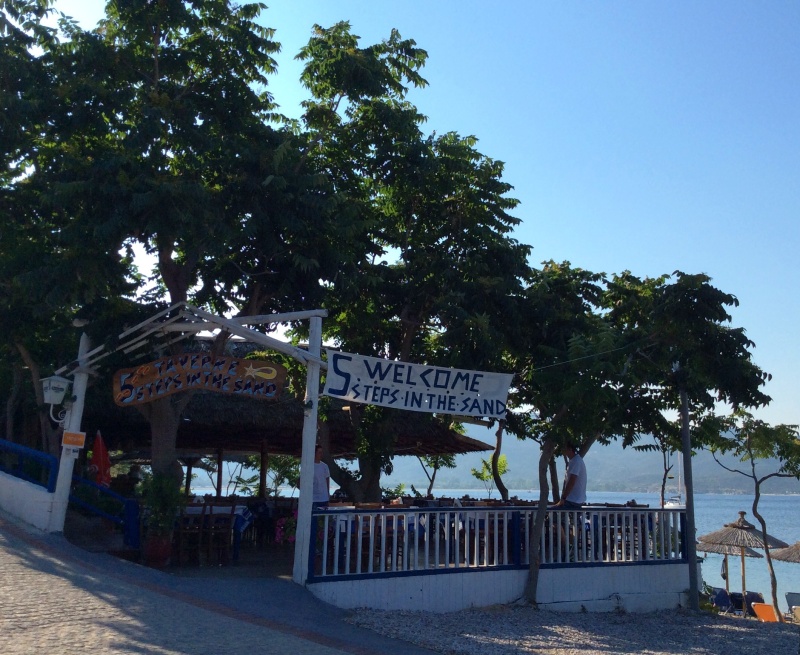 We arrived down on the Sithonia peninsular on our second night in Greece. The aim was to drive around the three of the Chalkidiki peninsulars, find the best camp ground, put up the bell tent (now known as “the castle” from one of the ladies at this camp ground) and spend 3 or 4 nights lying on the beach and possibly exploring from the camp ground. 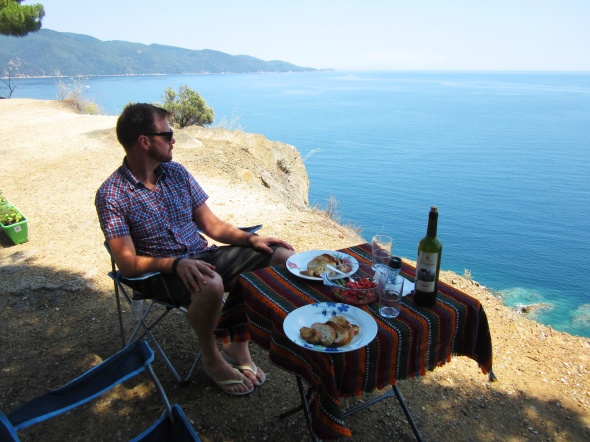 Lunch stop on the first peninsular. Bruschetta on fried bread.

The adventure took quite a bit longer than we originally thought and we were only arriving at the first camp ground at about 3pm. By the time we had found the 3rd campsite we were pretty tired and hot so decided that it looked suitably nice so we thought we would put the bell tent up for 2 nights, go exploring around the peninsular, decide which was the best camp ground and then either move or stay for the remainder of the time. 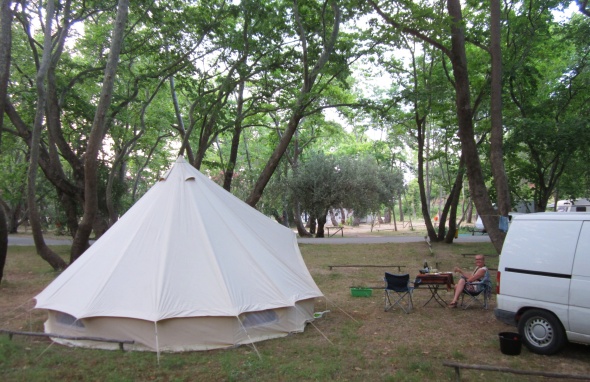 Setting up our camp spot… It was nice and quiet to allow us to take up several spots.

The next day we set off around the peninsular to find the best camp ground. We arrived in the next little village, Sarti and thought we had better do some grocery shopping for lunches and dinners for the next few nights. We found a great little fish shop with amazingly fresh fish, and a butchers next door. 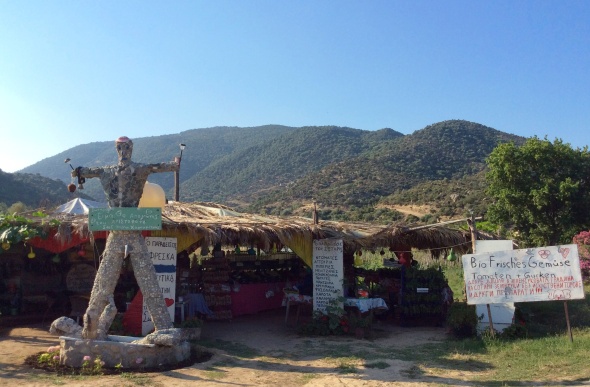 We then set on out of Sarti and past by a little road side fruit and vegetable stand covered with palm leaves. The name “bio” caught both of our attention and we braked quickly and returned back to the little shop.

At initial viewing the vegetables looked different and not so inspiring. Tomatoes were looking very green and under-ripe, cucumbers were all crazy shapes, potatoes were all kinds of sizes from marble size to house brick, all jumbled together. We started getting a few peppers which looked reasonably normal, when a young greek guy came up to explain that his father grew everything in the shop in the surrounding land and he made sure it was all thoroughly organic (“no medicine, no medicine”). It also happened that his father and mother were eating lunch at the same time with the farm hand, and they all started chipping in with some greek explaining how good their produce was.

We decided to give it a go and buy a few tomatoes and cucumbers when the father called us over to the table to try his local Tsipouro (distilled grapes with a little aniseed added – similar to Ouzo). We explained we were driving which he responded “No polizcie, no polizcie”. We had a little taste and it was good. The mother then gave us a taste of their succulent, fall off the bone pork stew and father pulled a cucumber off the vine next to him and asked Julie to peel it so we could try. After a few failed attempts Julie had the knife whipped off her by the father with a grunt of disgust, and quickly peeled it and gave us half each with a sprinkle of salt. It was fantastic.

We then decided to add further vegetables to our bags, bought a small bottle of Tsipouro, and bought some of his special Greek Mountain tea which he collected in the surrounding hills and dried.

Our young greek guy asked whether we had been to the beaches just down the hill from their shop? We said that we were planning to go around the peninsular, but he suggested we visit the beaches first then carry on.

Waving goodbye to the Bio Family, we set off towards the beaches. We past by a large beach, then several small coves with gorgeous beaches and came across a fantastic taverna called “5 Steps in the Sand” which as the name suggests was perched just above a lovely little beach, and was possibly just more than 5 steps until you touched the pristine aqua water. 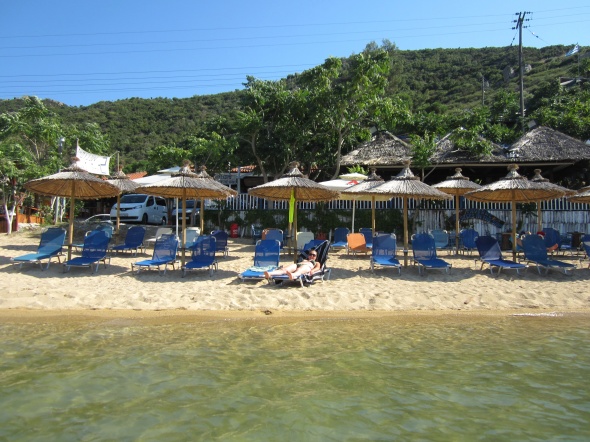 Julie slowly sliding off the deck chair into the sea with the Taverna just behind.

So we opted for a late lunch, then a swim, and a little lie under their umbrellas on some deck chairs, and before we knew it, the time was 6pm. So our adventure around the peninsular had resulted in just a half hour drive.

We decided that our camp ground was likely to be the best so ended up staying for 3 nights, and then 4 and when we checked out, they informed us we had actually been there for 6 nights.

Such a lovely camp ground nestled in between two hills that come all the way into the water creating a private beach for the camp ground and lovely big trees to provide shade during the heat of the day.

12 Jun This entry was published on June 12, 2014 at 4:17 pm. It’s filed under Food, Travel and tagged bell tent, bio, camping, Chalkidiki, Greece, Lacara Camping, Sithonia Penninsular. Bookmark the permalink. Follow any comments here with the RSS feed for this post.

One thought on “Around the peninsular”