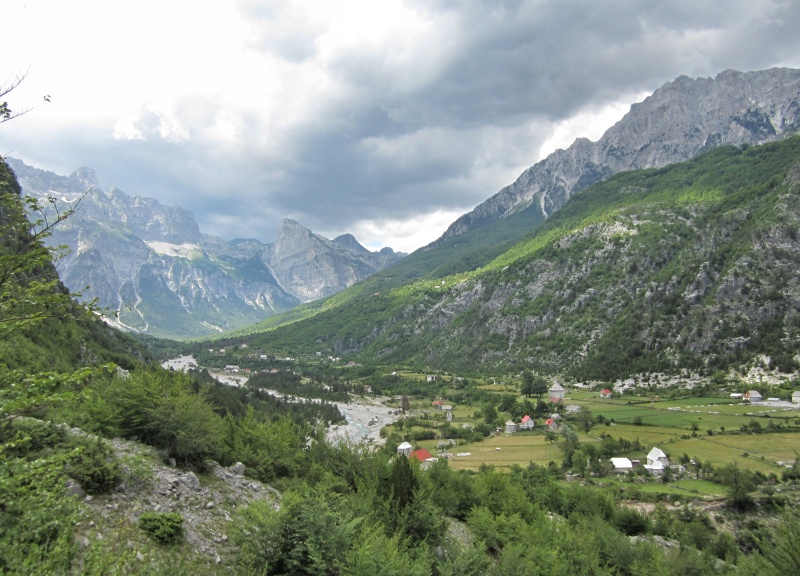 Peaks of the Balkans – Thoughts and scenes (Part 1).

“A fantastic introduction to the Albanian Alps”

Pavlin met us in Boga and together we walked part way from Boga down into Thethi, via a peak from which we had 360 degree views of the Albania Alps. From here we could see the path that we would walk tomorrow and our return route from Montenegro to Thethi. 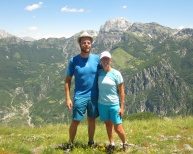 The pass we will hike in the morning is over Robs right hand shoulder.

The Rocky peaks at the end of the valley which we will return over from Montenegro.

“I feel as though I am walking into the centre of the earth; enveloped by the mountains, Mother Nature giving me a hug”

The green peak in the middle is our summit yesterday. 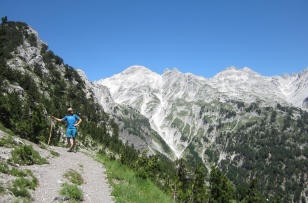 I am a mountain man!

Our trail into the valley. 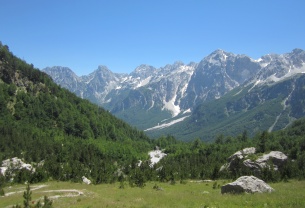 Enveloped by the mountains.

“Endless alpine meadows of flowers. Just as you think you have seen all the flowers, a new one appears” 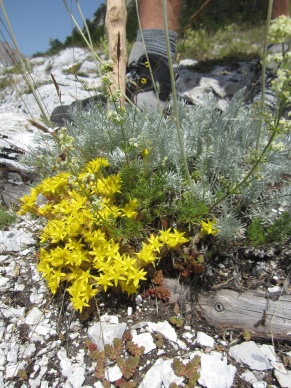 Where we came from…..

Alpine meadows, what you can’t see is that it is filled with miniature pansies of multiple colours.

A very interesting valley. On the left is granite, and associated forests and fields. On the right limestone, treeless with jaggard rocks and stinging nettles.

The bridge leading the Cerm, our resting place for the evening (after 9 hours of walking).

Doberdol situated in a stunning dale, under the shadow of Tromedja Peak where the boarders of Albania, Montenegro and Kosovo meet.

Doberdol is where the farmers bring their animals, families, couches, kitchens and lives when there is no grass in the valleys during the summer. Every year they return to the same alpine pastures, repairing their huts after the winter, digging up the potatoes from last years crop and importantly fattening their animals and making the cheese that will see them through the winter. Across the Albainian Alps you will find summer farming communities like Doberdol. 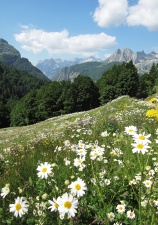 Resting weary feet at the shephards hut, our home for the night. 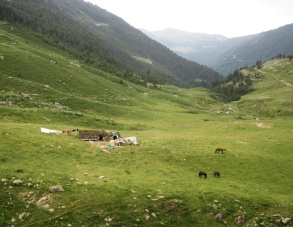 View back down the Doberdol dale.

Doberdol in the (very) early morning light, as we hike out of the dale.

“There is no one truth when Politics or Religion are concerned”

On day five we have a ‘rest day’, just four hours of walking. During this time we walk through all three countries of the Peaks of the Balkans and stand at the peak which is the meeting point of the boarders.

Rob, with right foot in Albania and left in Monenegro. 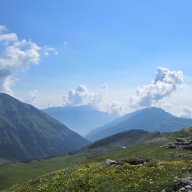 In the valley in Kosovo we are met by Mentor (our driver), who takes us to Visoki Decani Monastery. During our adventures we have seen a monastery and church or two, but this one had some of the best preserved frescos we have seen. We asked the Monk that showed us around, how this monetary from the 14th century on the boarder of Kosovo and Albania had survived, his answer “an act of God”.

When we returned to the Landrover, Mentor had a slightly different perspective. The monastery was originally built as a Roman Catholic Church by some ancestors of Mentors’, it then became an Eastern Orthodox Monestary and was protected by the Albanians during the Ottoman era, presently Mentor and most of the Kosovo Albanian population are observing Ramadan.

To enter the Monastery we were required to submit our passports under a heavy military presence. The entire complex is surrounded by a 12 foot high wall. This was built several years after the Kosovo War, even though it had survived undamaged and was never a specific site of tensions during the war.

03 Jul This entry was published on July 3, 2014 at 10:45 am. It’s filed under Travel and tagged Albania, Flowers, Kosovo, Pavlin Polia, Peaks of the Balkans, Thethi, Travel. Bookmark the permalink. Follow any comments here with the RSS feed for this post.

3 thoughts on “Peaks of the Balkans – Thoughts and scenes (Part 1).”