Last week we had some lovely powder, but some not so lovely visibility. We were riding some fresh lines just off piste under the chair with deliciously soft powder under our floating boards, but not venturing too far from the piste as we didn’t know the area so well. We were on a ski lift back up to the top when the clouds finally started to clear. Below was a lone snowboard far from the piste on the top of a steep decent into what looked like a little stream. We started joking about where he was going to go next when he dropped in and ended up stuck deep in the bottom, probably knee deep in water rather than snow. One stranger on the chair turned to us and said that he had spent a season in Morzine 4 years earlier and mentioned he was probably looking for the secret fairy trail*.

“If only he took the first turn through the trees past the pylon, it drops straight into the (secret fairy) trail.”

So as we said bonne journee at the top of the lift we thought we should have a go to find the (now not so secret fairy) trail. We flew down the run and dropped off piste towards the little stream but turned left at the pylon and dropped underneath the lift and through a couple of trees into untracked powder into the dark forest. The first turn through the trees led to another which in turn lead to another. Each turn was banked like boarder cross, and as we sank further into the forest, it became apparent we were on a summer mountain bike single track. It was amazing… Very quick turns through the trees, darting left and right, and then suddenly we came across the stream that the poor snowboarder had come across but thankfully for us, crossing the stream was a little bridge. So much fun that we had to do it several times and will be our little secret that we can share with our skiing and snowboarding friends that visit. We are sure there are fairies in there somewhere, but probably staying well clear of a couple of hooting and hollering (slightly out of control) snowboarders.

(3) Banked turn onto the bridge

(4) whoops, who put that jump into the bridge? 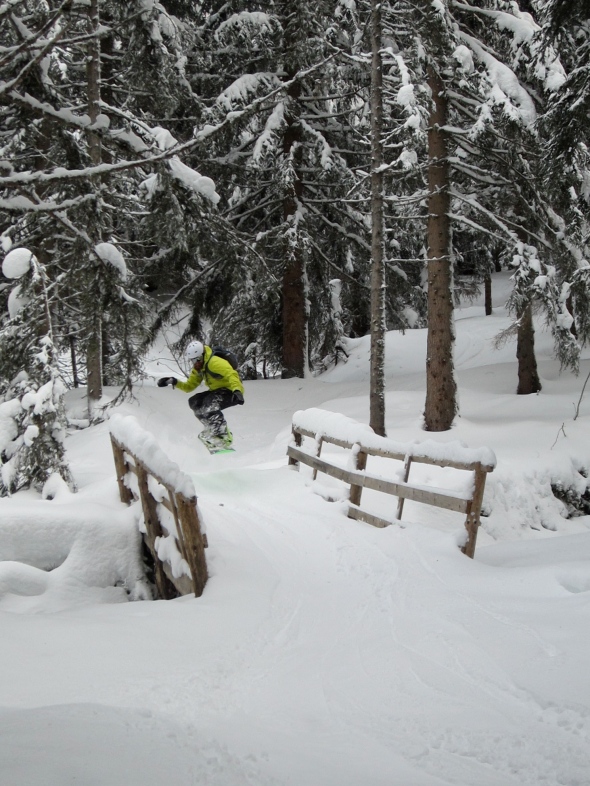 20 Feb This entry was published on February 20, 2014 at 10:05 pm. It’s filed under Uncategorized and tagged snowboarding. Bookmark the permalink. Follow any comments here with the RSS feed for this post.

Older: Nyon Powder on a Sunny Day
Newer: Sourdough in the Snow

6 thoughts on “Racing the Fairy Trail”